In loving memory of Henry Block

It is with great sadness that we inform you that Henry Block passed away earlier this week after a long battle with Parkinson’s disease. He was 89.

Henry served on the Board of Directors from 1989 to 2006. He and his wife, Laura, had a profound impact on Power to Change and helped define the current course of the organization.

He was known for his vision, with a unique insight into the potential of people and projects. He and his wife were heavily involved in the early JESUS Film mission trips that became the JESUS Film Church Planting Strategy. He played a major role in the leadership ministry that became LeaderImpact. He also championed Power to Change’s internet ministry in its earliest days, foreseeing the important work of The Life Project in sharing the gospel online.

Henry was generous with his time, expertise, and finances, donating to many ministries within what was then Campus Crusade for Christ. He was also instrumental in the construction of the Power to Change headquarters in Langley, BC. The atrium was named the Block Ministry Centre in 2008 in his honour.

Dennis Fierbach remembers Henry as “determined, incredibly insightful, and passionate about sharing Jesus” and described him as a “towering man with huge hands, who could be an imposing person, but he had a tender heart and a generous heart, with a good sense of humour.”

Even when he was diagnosed with Parkinson’s, he refused to complain, instead devoting his time to raising awareness for Parkinson’s and fundraising for programs and support for those struggling with the disease.

He was known for his love of Jesus Christ and passion to fulfill the Great Commission. He will be dearly missed, but his contribution to furthering God’s Kingdom will never be forgotten. 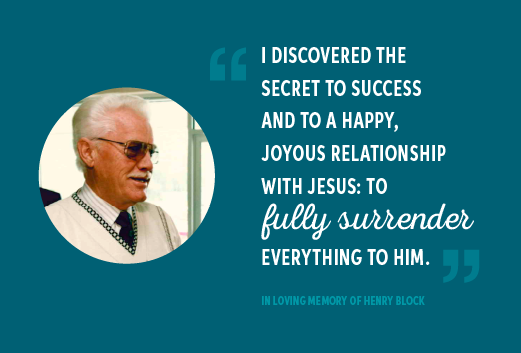